SOPHIE heralds from one of Britain’s top jazz families. Enjoying a career as a jazz vocalist over the last three decades she has also received much acclaim as a songwriter and composer, with her work being used in major US TV shows such as ‘Six Feet Under’ and her songs recorded and performed by award-winning jazz luminaries such as US pianist Louis Durra and UK vocalist Liane Carroll to name but a few.

“A Scottish singer-songwriter with jazz and folk roots: Over the years she’s drawn comparison to several world-class artists, including Peggy Lee, Alison Krauss and Norah Jones. That sort of information comes as no great surprise once you’ve had the chance to hear Bancroft sing. Her voice is a perfect instrument.” Leicester Bangs 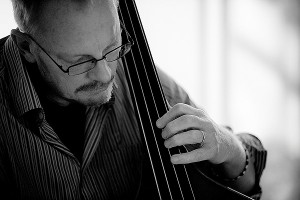 TOM, originally from Edmonton, Canada, moved to Europe after graduating from McGill University with distinction on jazz bass. His diverse roots, including old school R+B, psychedelic rock, experimental fusion and an early initiation in jazz and improvised music has created a melodic sensitivity and interpretive power in his playing. He capitalises on the unique colours and ranges of the double bass and electric 5 string in the sparse setting of the duo. Aside from working with Sophie he is the bassist in the Dave Milligan Trio, The Unusual Suspects and this own group The Band Lyne. Previous work has included Martha Reeves and The Vandelas, Charlie Hunter, Kevin MacKenzie, Karine Polwart and Brian Kellock.

To book the duo, please send us a message HERE