Bancroft & Lyne are available for digital touring – example of livestream hereand traditional touring whenever that becomes possible – we are a one household band.

Performing together for the past 2 decades Bancroft & Lyne’s repertoire includes a mix of original contemporary jazz-based songs alongside reimagined jazz classics and covers of songs by songwriters such as Tom Waits and Joni Mitchell. Heralded as a ‘must see’ act at a recent Xerox Rochester International Jazz Festival, New York they have performed at many venues and festivals around the UK, Europe and North America.

As a couple living in the same house during lockdown they used the unexpected time to evolve the duo’s identity, finding different ways to orchestrate old and new songs.  Alongside this they developed a weekly international livestream audience and produced a new CD Monday Nights which has received much critical acclaim, including being listed in JazzViews top jazz albums of 2020

“an album of the highest class, superbly produced, and entertaining” – JAZZVIEWS

SOPHIE heralds from one of Britain’s top jazz families. Enjoying a career as a jazz vocalist over the last three decades she has also received much acclaim as a songwriter and composer, with her work being used in major US TV shows such as ‘Six Feet Under’ and her songs recorded and performed by award-winning jazz luminaries such as US pianist Louis Durra and UK vocalist Liane Carroll to name but a few.

TOM, originally from Edmonton, Canada, moved to Europe after graduating from McGill University with distinction on jazz bass. Aside from working with Sophie he is the bassist in the Dave Milligan Trio, The Unusual Suspects and his own group The Band Lyne. Previous work includes Martha Reeves and The Vandelas, Tommy Banks, Charlie Hunter, Mairi Campbell, Kevin MacKenzie, Chic Lyall, Karine Polwart and Brian Kellock.

Bancroft & Lyne have received plaudits for previous albums, but Monday Nights showcases a leap forward in their focus on this ever-challenging duo format.  Working a powerful communication through groove and melody they deliver songs and improvisations with an understated intensity.

“Bancroft & Lyne are first-class jazz performers, improvisers and songwriters. Their performances here are upbeat, musical and subtle, and surprisingly made me totally forget about our COVID outbreak isolation lockdown.” THE WHOLENOTE (link to original review)

“an album of the highest class, superbly produced, and entertaining”  – JAZZVIEWS (link to original review)

“this music heralds a new kind of lieder in which both Miss Bancroft and Mr Lyne are equal partners. What this duo succeed in doing is add a veneer of most eloquent intimacy to the art of the [voice and bass] duet” – JAZZDAGAMA (link to original review)

Some of our favourite past gigs have included: 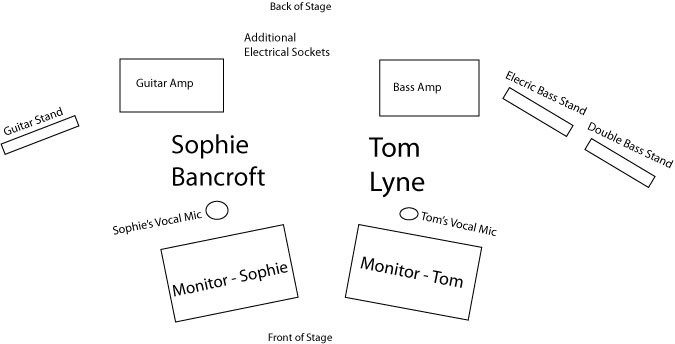 Setup and sound can usually be complete within one hour.